Ugh Monday – it seems like yesterday was Friday! I want a do-over!!

Since starting to monitor my diet and fitness (regularly) I have noticed both weight and physical changes.  I run between 2.5-4 miles five times a week now and my endurance is up and jiggle is going down.  I’ve lost about 8 pounds in roughly 6 weeks.  Not too shabby, although I always have to remind myself that change is not overnight especially when the process is slow.

I’ve used several ‘apps’ over the years to help track calorie/fitness intake and after a few days I would always get so bored this included the lance armstrong app, the weight watchers app, the list goes on.  So I downloaded for FREE My Fitness Pal – and have loved it.  I sometimes disagree with the fitness calories burned, but I usually do not take that into my caloric count for the day and eat to reach different fat/calorie/protein numbers.  It was definitely a wake up call the first few days of monitoring my food intake because I found out I was snacking SO MUCH.  Literally 500-700 calories just on ‘snacks.’  Opps!  So tracking has gotten me on the right path and I’ve found the inclination to ‘over-indulge’ is decreasing greatly.

One of the great things about My Fitness Pal is not just that it’s free, but that it’s easy to work with.  It has thousands of entries – even for ‘lesser-known’ chains and it also has the super convenient bar-code scanner.  Which is great for milk, almond milk, protein bars, eggs, pretty much ANYTHING with a bar code. Here are some screen shots – like I said I disagree with how generous it is with calorie burning for activities, but I always eat to a certain level and then it tries to discount way way more than I feel it should.  In other words don’t worry I ate more than 1200 calories but believe me doing 30 minutes of moderate running does not justify the app telling me I only ate 600 calories.  I get low glycemic level rage so there is NO WAY I could operate at these levels. 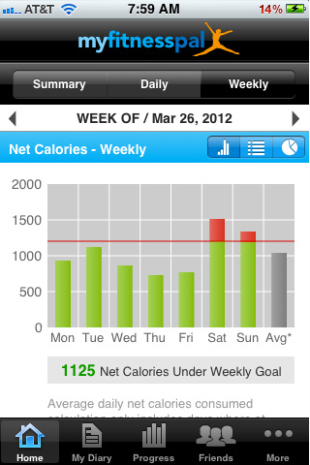 So for food that one is great – especially because it’s for free.  They even have it so you can sync it with friends which is always far more motivational than going solo.

For exercise I have really liked RunKeeper.  Now I have used this consistently for 4 weeks and I have had great success using it, but I have also had about 4 times of utter disappointment.  The GPS for whatever reason thinks I’m running way too fast or have gone way farther than I have.  BUT despite those times I love that an automated voice comes on telling you your pace, time, and distance every 5 or whatever predetermined time.  You can also set up the voice to coach you to run faster, slower, and sprint.  I also like that it runs concurrently with other apps so it doesn’t shut Pandora off or stop working if a text/call comes through.  I really enjoyed knowing how far my little run was and being able to adjust it to go a little bit farther every day.  Plus this one was FREE too.

I’ve actually improved to a little under a 12 minute mile (up to 4) since this one! Sprints are amazing!!! But you can see this looks alright – I’ve also looked at my phone only to see one of these bizarre trackings:

I’m pretty sure I would be trying for the Olympics this summer if I could run at this pace!  Of course this type of scenario is incredibly frustrating – considering it means I’m cussing at my phone while trying to run.  Usually if this happens Flak knowns just to sit down on the grass and wait.

Plus taking Flak has made me more accountable – I feel bad if we don’t go for a run/he is WILD without one.  So therefore I go everyday I watch him, unless I want to try to deal with the beast.  Running really benefits me in more ways than one!

This photo was taken ‘pre-run’ days… I’m starting to think Flak has ‘the hunger.’ Teddy bears, squirrels, flies…. I don’t even want to know what’s on his ‘kill’ list next.

What do you think about technology for fitness?  Is it more frustrating than functional for you or do you find it makes things easy?

One thought on “Food & Fitness Journals”