It has been a LONG week since I first updated about our hardwood redo.  After spending 30 combined hours sanding, I came by the house on Tuesday and realized in the daylight – we had missed some spots under the dust/dark lighting. I wasn’t super bummed, but it was just hard to think through what the next steps would be.  Would we redo the whole floor with the drum sander? That would be okay, but it would mean re-renting all the tools again – $$$$$$.  After asking a flooring friend, we decided the edger was the way to go.

I spent 6ish hours on Thursday edging out any left over varnish that was on the floors.  It was primarily in corners of boards since the boards had been worn to different heights over the 61 years they had been in that house. The edger is a b*tch of a tool to use also because you have to bend over and move your arms back and forth – basically imagine the most awkward position ever and add a high power sanding tool.

The next step was the screen buff. Now I’ll admit, anytime I’ve seen someone running a buffer it looked pretty damn easy. Like just lightly moving it back and forth – no effort. Well, actually using a floor buffer for the first time is pretty much like having a heavy tool jump out of your hands and twirl around like some sort of giant angry cat that is trying to escape your cuddle….. Thankfully, my dad came by just to see if there was anything he could help with – he had to not only run the buff for more than 70% of the time, but he taught me how to run the buffer with control.

I seriously can’t believe how hard it was to control a buffer. Totally surprised.

Anyways after the screen buff (which took much longer than also thought due to the wood filler that I was too liberal with) I had to clean and mop the floors.  Again, Lois swooped in and helped so much to get the final push done.  We had to dust the walls, the door knobs, everything had dust on it. Then we mopped with special ‘pre-oil’ wood cleaner.  It was a long day at the house, but it set me up for success in the next step.

Finally, I get to put oil on my damn floors. I used a paint roller to apply the oil, which had to sit and absorb into the floors for 15-30 minutes. Then I used my good old friend the buffer to first buff the oil into the floors with a red pad.  The final step was using terry cloths on the bottom of the buffer to clean any left over oil.  The results were AMAZING. 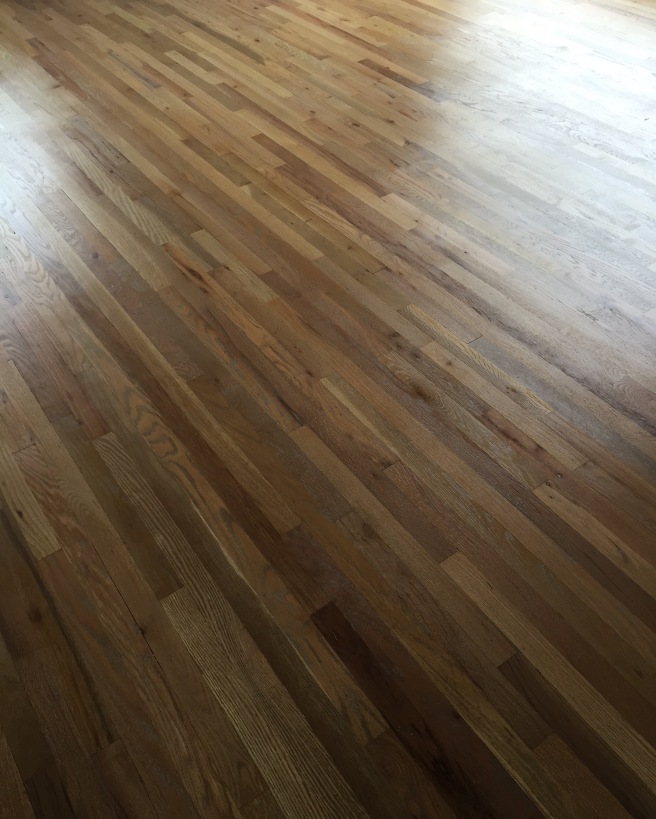 I had one of those moments when I was done and could see the oil where I felt like crying, because I was so fucking happy I did this even though for the entire past week I have felt 100% insane. I still have three bedrooms to do, and then apply some white paste as the final ‘coat’ of oil.  It will probably result in a little more ‘milky’ and I’m really excited to see how it comes out in the end.