What’s this? Another baby on the way?! Yes!

This time my cousins Oli and Matt are expecting their first – a baby boy named Mateo! I just love that name. I can’t wait for him to be here. 🙂

Typically, I stick with pretty traditional quilting.  Civil War quilts are my favorite, followed closely by The Farmer’s Wife (1930s).  But, I just couldn’t see myself giving Matt and Oli’s son a traditional quilt. I decided to go for something bold, modern, and way out of my comfort zone. Pretty much the entire time I made this quilt I asked two questions 1) is there something with more contrast? 2) is there something bolder?  I think I finally got the questions answered with ‘no’.

Again, I didn’t use a pattern and I just used jelly rolls. It will be the last time I use jelly rolls though. They just aren’t consistent! Im pretty sure it’s the one time that a human is more consistent than a machine – plus they cut them between 2 3/4 inch and 3in and it just makes no sense. trying to match them up with anything is a nightmare.  If you look close you can see I used a lot of optical illusions on this quilt to adjust or the non-standard jelly roll strips. *shakes fist* never again jelly rolls! But I’m super happy with this quilt. It’s modern, fun, and super bold. It’s perfect.

Over a week ago I got to attend my friend Juanita’s baby shower for her upcoming daughter! It was such a beautiful baby shower – the food, location and decorations were perfect! Not to mention I got to see so many people I haven’t seen in probably 5 years!

I decided to make a second version of a quilt I made my niece last summer, because I just love the pattern. This time I didn’t measure a thing – which was really dumb. But it worked out! I also used jelly rolls – thinking it would speed up my time.  The thing about jelly rolls is, they don’t save time because they aren’t identical. If I had cut these strips I would have been done a day sooner, I actually had to spend an hour at least readjusting the seams in the center once I got it all pieced. Jelly rolls just aren’t predictable. The time I saved not cutting I more than spend double in the end dealing with.  Long story short, I used jelly rolls on another quilt after…. more to come on that.

The quilt came out super adorable – I love it!

Goes to show the things that give you the most grief are always the best.

I decided to make some fun little zippy bags to sell in shopghostfaceknitter.com – they feature three internal zip pockets and three larger spaces.  Perfect for notions, pens/pencils, makeup, jewelry, anything you want to stow away in style.

These will be available in person on October 12th at Tooeys Off Colfax’s Hellbound Hucksters! And available online November 1st!

I have a fever and the only prescription is more quilting!

Okay corny jokes aside – I finally made the leap into quilting this month and it may or may not be why I haven’t been updating my blog. (Sorry I’m not sorry!)

I first made two no-piecing quilts and then I dove right in to something that was actually made with squares.  I am having a blast.  I can’t believe how much fun it was.

I saw a turkey crochet hat on Instagram yesterday so last night I decided to make my own version. I think I’ll go ahead and just start making all these outfits/hats for the tribe for all holidays. Plus I’m already thinking about Boris as a Swedish opera singer with the hat and braids……

It’s no surprise that I LOVE  my bike. In fact, I’m pretty sure I’m in a relationship with my bike.  I commute to work everyday on it, choose to ride long distances because it’s just so fun, and prefer to take a ride on my bike rather than use the car. From Memorial Day to Labor Day I managed to hit 1000 miles, despite one nasty crash (sprained the membrane between my ulna and radius), a car wreck, and three flats.  Here are some funny/nice/awesome moments of my first summer cycling in Chicago.

That time I wore this white Nike top and there was a surprise downpour on the way home….. AWKWARD.

On the ride air pumps. This was the first of 3 flats I encountered – all within the same week too!

Work is nice enough to have an indoor bike rack. Yoshi never has to brave the elements without me.

The aftermath of Yoshi vs. Car. Twisted handlebars… thank goodness no other damage was done.

Sorry for my butt… about a week after my first crash. It took two months for that bruise to totally disappear.

On the road with Yoshi and Leopold. If only that squirrelly little pug would sit in a basket… sigh.

Here’s to many more 1ks on Yoshi!

My epic knitting/crochet group StitchCraft met on Sunday at Loopy Yarns here in downtown Chicago. They have open knitting Sundays 12-5pm and so we organized four of us to meetup and chat/knit/crochet and shop. Beverly was so awesome to plan this for us!

I have been quite the crafting fool lately. I have had several custom orders from people through Instagram and now with that momentum I have decided to open an Etsy store as Ghostfaceknitter!

Huzzah! I’m guesstimating in the next two/three weeks I will go live with that store – and you all will be in the know when I do – have the confirmed timeline. Let’s take a look at some of the items I’ve been stock piling, custom making for you lovely lovely GFK supporters. 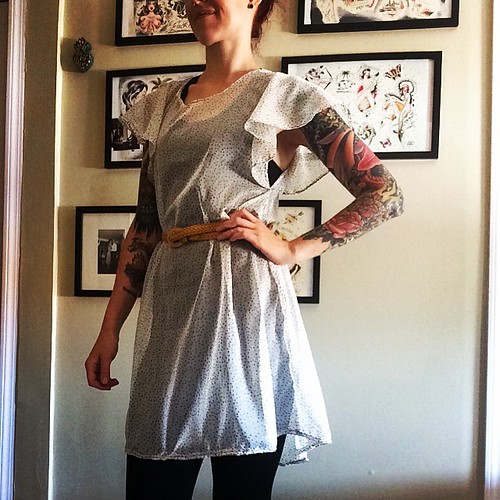 What do you think? I’m think about cowls, sunglasses cases, different skirts/shirts/dresses, and of course more cakes! 🙂